operates as an open, transparent, collaborative

and permanent committee of volunteers within PESC.

and open to representatives of PESC Member

of stakeholders with Canadian interests.

shares ideas and serves as an

in order to achieve

Participates in other PESC Groups

to remain informed of ongoing

initiatives and how they

and solid representation in global initiatives as a result of relationships with PESC & ARUCC, both ​

Promotes and preserves the concept of

"one standard", the primary principal

To register for the CanPESC Annual Meeting 2022,

please register here and complete the Registration Form below.

A special thank you to sponsor and host EducationPlannerBC!

The formation of CanPESC - the  Canadian Postsecondary Electronic Standards Council - in 2011 solidified the value and importance of Canada's role within PESC and drew together many Canadians from across the country working towards a common goal.  Read more here.

The Canadian presence and influence within PESC has existed since the very formation of PESC.  As Canadian students cross provincial and international borders to attain their education, the need for institutions, software providers and systems vendors that support Canadian and international markets to ensure mobility and interoperability has never been greater.

The formation of the Canadian PESC User Group (CanPESC) in 2011 solidified the importance of Canada’s role within PESC and drew together many Canadians from across the country to work towards a common goal. Its main mission is twofold:

To encourage participation in PESC workgroups

To promote and educate Canadian stakeholders

on the importance of data standards and interoperability,

thereby avoiding duplication of efforts, costs and of data standards.

As the voice and official committee representing Canadian interests, CanPESC also serves in a liaison role. It coordinates and communicates its efforts across all provinces and territories, and works closely with Canadian organizations such as the Association of Registrars of the Universities and Colleges of Canada (ARUCC) and international organizations like the Groningen Declaration Network (GDN).

THE CANADIAN INFLUENCE AND HISTORY WITHIN PESC

In 2007, for PESC’s 10th Year Anniversary, the PESC Fall 2007 Data Summit was held at the Ritz-Carlton Hotel in Montreal.

In 2012, for PESC’s 15th Year Anniversary Year, the PESC Fall 2012 Data Summit was held at the Four Seasons Hotel in Vancouver.

In 2013, through establishment of CanPESC, PESC entered into a formal MOU with ARUCC, allowing ARUCC and PESC to attend each other’s events without charge, thereby fostering a closer working relationship.

In 2017, for PESC's 20th Year Anniversary, the PESC Fall 2017 Data Summit "Advancing Student Mobility in a Digital World" was held at the Radisson Waterfront Hotel in Toronto.

In 2018, at the PESC Fall 2018 Data Summit in San Francisco, Charmaine Hack, ARUCC Past-President and Chair of the ARUCC/GDN & Student Mobility Project, served as Keynote Speaker.

In 2019, in support of a new collaborative arrangement, the Fall 2019 Data Summit was held in Montreal at Le Centre Sheraton Montreal Hotel in Partnership with the Groningen Declaration Network. PESC's Summit hosted the Board of Directors of the Groningen Declaration Network, the Board of Directors of PESC, a day-long meeting of CanPESC at McGill University, the AACRAO SPEEDE Committee, a silent auction benefiting Indspire, and a day-long Retreat of the ARUCC/GDN & Student Mobility Project, in addition to General (Plenary) and Breakout Sessions.

In 2021, Romesh Vadivel of McGill University and Charmaine Hack of Centennial College were recognized with PESC's Distinguished Service Award.

In 2022, for PESC's 25th Year Anniversary, the PESC October 2022 Data Summit is planned at the Hyatt Regency Vancouver. 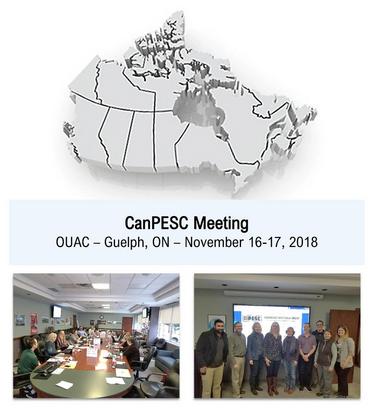 CanPESC is the Canadian Postsecondary Electronic Standards Council User Group - an open, collaborative permanent group of volunteer stakeholders within PESC that serves as a clearinghouse for discussion and new ideas, a coordinator to help support electronic initiatives with several liaison roles established, and as a unifier in the mission toward digitalization of educational records.

CanPESC has participation throughout almost every province and territory in Canada from provincial application centres, leading universities and colleges, and service providers.

CanPESC officially launched as a User Group at the Fall 2011 Data Summit in San Francisco to formally and permanently institutionalize the Canadian voice within PESC.  The role and influence of Canada has been a major part of PESC since its founding. Canadian representatives have served on the Board of Directors, received Distinguished Service Awards, chaired groups and committees, won Best Practices Competitions, and PESC has held Summits in Montreal, Toronto & Vancouver.  The first deliverable of the Canadian PESC User Group was to introduce PESC at the ARUCC Conference June 2012 in Ottawa.

>>  WHO IS INVOLVED WITH CANPESC?

CanPESC includes participation throughout almost every province & territory in Canada.  All of the major application centres, leading universities and colleges, and service providers and vendors are active in the User Group.

>> WHAT ARE THE BENEFITS OF CANPESC?

CanPESC focuses on interoperability, enhanced service and delivery, reduced cost, and improved data quality.  CanPESC ensures these benefits for Canada’s students and institutions by raising awareness of the importance of standardization and interoperability.

CanPESC is a permanent group within PESC, ultimately governed by the PESC Board of Directors.  CanPESC encourages active participation and diverse membership across Canada. It is semi-autonomous, sets its own agenda and is responsible for its overall activities, communications, meetings, and outreach. CanPESC Co-Chairs are from PESC Member organizations and appointed by the PESC Board of Directors.

​>> THE CURRENT STATUS OF CANPESC?

CanPESC is participating and cooperating in several initiatives:

1) Continuation of the work started by the ARUCC Groningen and Student Mobility Task Force formed in 2014 to focus on advancing student mobility through data exchange.

2) Serving as advisors and Working Group members on the ARUCC-PCCAT Transcript and Transfer Guide launched in early 2016.

​4) Supporting PESC's meetings and events and serving on the Planning and/or Steering Committees, when needed.

>>  HOW MUCH DOES CANPESC COST?

CanPESC is an open, transparent and collaborative committee seeking broad participation and is therefore open to all Canadian stakeholders free of charge.

>>  HOW DO I GET INVOLVED WITH CANPESC?

CanPESC User Group meetings are open to higher education stakeholders and those with stakeholder interests in Canadian education.  Join the User Group calls held every month on the 2nd Thursdays at 12 noon EST.​​​​ 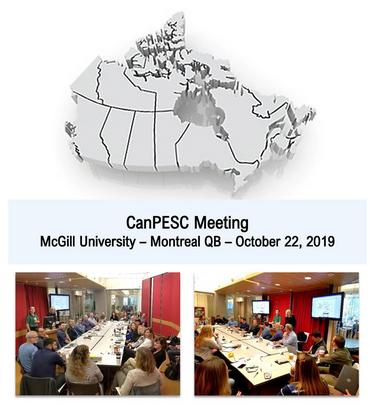 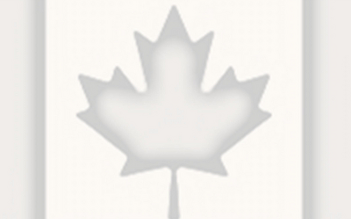 ​​​​​is the authoritative group within PESC

support and incorporate the​ needs and interests of 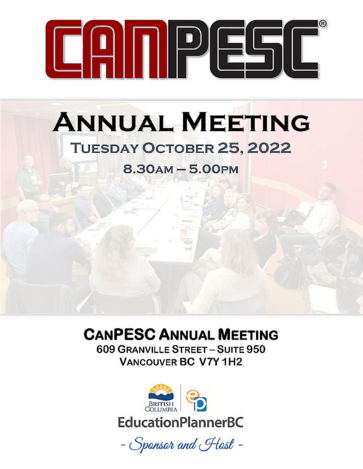 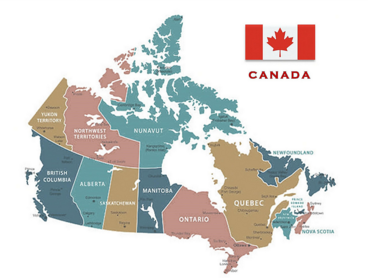 Thank you for registering for the CanPESC Annual Meeting 2022 on October 25, 2022! CanPESC Annual Meeting 2022 October 25, 2022 8.30am - 5.00pm 609 Granville Street – Suite 950 Vancouver BC V7Y 1H2 Please check the PESC website and the CanPESC User Group page for updates, news and announcements! A special thank you to EducationPlannerBC for sponsoring and hosting! www.pesc.org

Register for the CanPESC Annual Meeting 2022

by completing the Registration Form.

for hosting and sponsoring CanPESC! 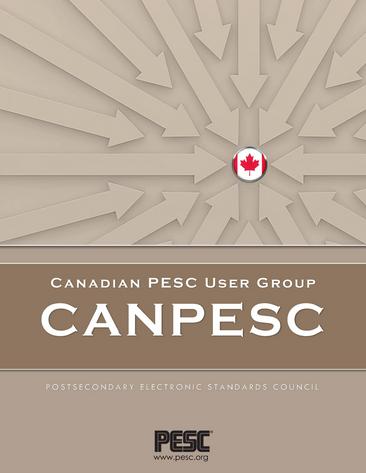