EDI is a technology for exchanging organized or structured data,

​To facilitate the exchange between users of EDI Standards and XML Standards, the AACRAO SPEEDE Committee and the PESC Standards Forum for Education published "crosswalks" - documents that map data elements between the separate EDI and XML formats.

Read more about EDI below. 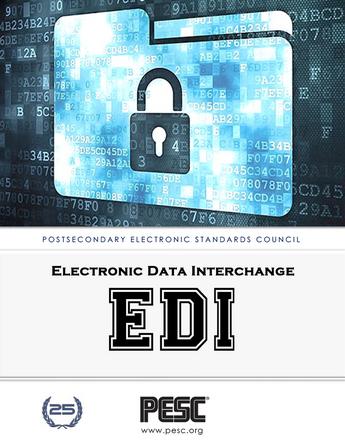 First introduced in 1968, EDI is a technology for exchanging organized or structured data, using agreed upon protocols and standards from one computer system to another without human intervention. While PESC has adopted certain EDI standards as PESC Approved Standards and hosts all corresponding EDI Implementation Guides, users must obtain the EDI standards from the American National Standards Institute (ANSI).

​The first version of the EDI Transcript Standard was distributed in 1990 and was the first student record spanning secondary and postsecondary education.  The Admissions and Course Inventory Standards soon followed.

In 1995 the University of Texas at Austin launched a free EDI Server to facilitate the secure exchange of EDI Standards.  Now the SPEEDE Server supported and operated by the National Student Clearinghouse, hundreds of users (colleges, universities, vendors, providers, states, provinces, etc.) continue to use EDI Standards through the SPEEDE Server.

Supported by the AACRAO SPEEDE Committee and PESC's Standards Forum for Education, EDI Standards and the collaborative process in which they were created continue to serve as the blueprint under which PESC operates its voluntary consensus and standards approval process.

While the EDI vision is for users (colleges, universities, vendors, providers, states, provinces, etc.) to implement and support full "machine-to-machine" operations between organizations requesting transcripts and those receiving transcripts, some may also use one or several portions of the "Suite" of EDI Standards.